Research fails to establish origin of this issue but evidence points to fact metal could have come from that captured from Spanish in this battle.

Following Commodore Dewey's return to United States 1899, he was honored at series of receptions, public and private. At some of these, guests were presented with medals struck from metal captured at Manila Bay and procurable from Government. Elsewhere, there was wide sale of souvenirs, including medals, claimed made from same metal. 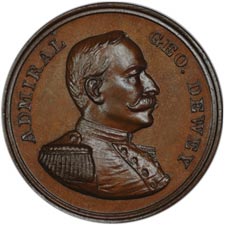 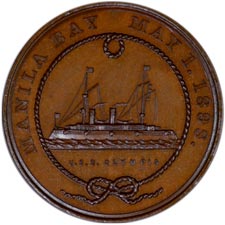 Obv. Raised bust r.; around Admiral Geo. Dewey.
Rev. Battleship, below U. S. S. Olympia--all within beaded circle resembling ship's rope, looped at top and tied in loose knot at bottom; outside around Manila Bay May 1, 1898.
NOTE: Two varieties known, with and without loop at top of rope on reverse; both varieties have similar rarity.