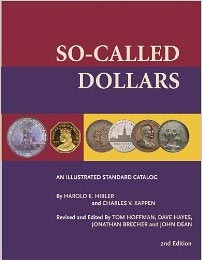 New changes in the book since the first edition (1963):

The printed book also contains rarity and pricing information, neither of which is available on this web site.

We would like to thank the contributors of this book for their knowledge, insight, and support. We recognize that without their help, this book could not be possible. These include:

From the Hibler and Kappen book, they defined so-called dollars this way:

This present work is restricted to medals of an exposition, commemorative, monetary and kindred nature. ...From the beginning, however, it was necessary to establish the following specific limitations in order to contain our efforts within a manageable perimeter:


This site is supported by the publisher and copyright holder of So-Called Dollars by Hibler and Kappen, The Coin & Currency Institute.